Other official information and services: belgium.be 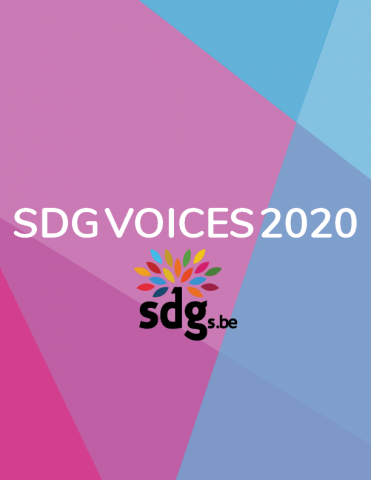 UN Secretary-General Ban Ki-Moon has appointed a number of global ambassadors for the Agenda 2030 for Sustainable Development, including Lionel Messi and Shakira, as well as our Queen Mathilde. For three years in a row, the Federal Institute for Sustainable Development has been choosing a number of ambassadors or ‘SDG Voices’ to raise interest in the SDGs among the general public. In 2020, this honour will go to the following seven organisations: City of Harelbeke, Royal Belgian Football Association, SDSN Belgium, Port of Antwerp, Combat Poverty, Insecurity and Social Exclusion Service, UWE and Diogène

In 2017, the FIDO worked together with The Shift (link is external) to choose the 8 SDG Voices by means of a double selection procedure: the Dutch-language 11.11.11 and their French-language counterpart CNCD,  the Society for a Better Environment, Colruyt Group, Duo for a Job, GoodPlanet, Le Mouvement Action Paysanne and the City of Ghent. First a nomination committee, composed of 17 experts from civil society, proposed a list of organisations that they felt had the most potential to represent the SDGs in Belgium. From this longer list, a jury of communication experts chose the eight organisations that were best equipped to reach a large audience. Follow this link to find all the members of the nomination committee and the jury (link is external).

In 2018 and 2019, the Federal Institute for Sustainable Development launched a project group to find 6 new organisations with a passion for the SDGs. A jury of experts have selected six new SDG Voices from the submissions made, taking account of the scope, feasibility and the creative and inspirational nature of the projects submitted. In 2018, it was the Metro newspaper, travel agency Joker, Natagora, VBO-FEB, MOOOV Film Festival and VVSG that were chosen to represent the SDGs. The SDG voices of 2019 were Rikolto, Ubuntu Festival, Janssen Pharmaceutica (J&J), Via Don Bosco, Hidrodoe and Fairfin.

THE SDGS IN PRACTICE

The SDG Voices not only inform people about the SDGs, but also encourage them to roll up their sleeves and get involved themselves with all manner of inspirational initiatives. Owing to their work in the past, all the organisations chosen can boast a credible list of achievements in the field of sustainable development and know the SDGs inside out. This is what makes them the ideal ambassadors to translate the SDGs into concrete actions and initiatives. An overview of the initiatives undertaken by these organisations can also be found here on this website.